Part of a Series: Yes, Book#1 of the Burnt Empire Saga

Source: Review copy provided by the Publishers as part of the blog tour 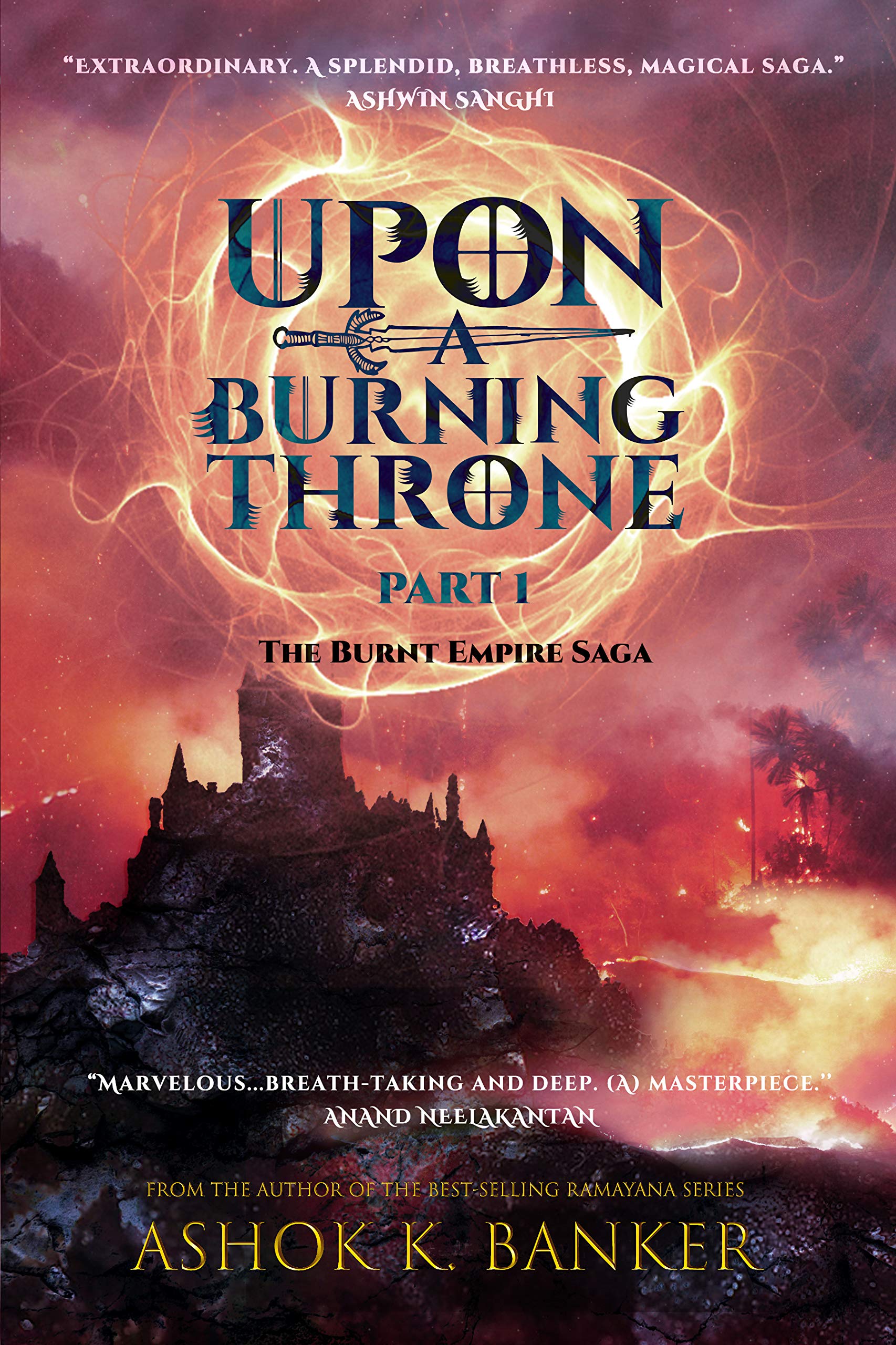 a world where demigods and demons walk among mortals, the Emperor of the vast Burnt Empire has died, leaving a turbulent realm without an emperor. Two young princes, Adri and Shvate, are in line to rule, but birthright does not guarantee inheritance: For any successor must sit upon the legendary Burning Throne and pass The Test of Fire. Imbued with dark sorceries, the throne is a crucible—one that incinerates the unworthy.

Adri and Shvate pass The Test and are declared heirs to the empire… but there is another with a claim to power, another who also survives: a girl from an outlying kingdom. When this girl, whose father is the powerful demonlord Jarsun, is denied her claim by the interim leaders, Jarsun declares war, vowing to tear the Burnt Empire apart—leaving the young princes Adri and Shvate to rule a shattered realm embroiled in rebellion and chaos….
Welcome to the Burnt Empire Saga..

This huge book is a retelling of the Epic Mahabaratha and is also pitched as the Indian Game of Thrones.

Let me start by saying, its right in one way with the comparison to GoT – the paperback has 343 pages but can easily be 600+pages of words fit into it. Its huge,  I mean to cover 20 pages it took me an hour!! And the characters – so many names to remember and the world, oh my god!! Incredibly built, for sure but a lot of information dump that it takes a little time to process everything. As this is the first book in the series, the author has taken time to get the reader acquainted with its world and characters. Its both an advantage and a disadvantage.

I should also mention that I haven’t read the original Epic , just bits and pieces from the television drama. I’m not completely aware of the story or the characters so it was a little fun for me to guess which character is who and already figuring out how or what his/her destiny would be. I was initially impressed with Vrath, the mighty Demi-god and Jilana the dowager queen, but then the story started moving around Shvate and Adri, Jilana’s grandsons.

There were disoriented timelapse events that confused me, maybe its just me because I read the book in intervals because of my full-time job.

Despite the heavy world building, slower pace in the beginning,  the book is bound to keep you hooked with its action sequences and that cliffhanger towards the end. With the promise of an even better sequel, the book finishes off in glory!.

P.S I’m a tad late in posting my review, this was supposed to be up by 28th July.

When I first heard about a modern day retelling of Pride and Prejudice, I was beyond excited. I’ve read so many retellings of this classic and I’m never bored. I always wanted to read American Street by Ibi Zoboi but never got the chance. When I Pride was released, the ebook price was somewhere near ₹300 and I just downloaded the sample to see if if I will like it. The first few pages were really good, and I found the audiobook in @storytel.in.. It took 6 hours to listen to the book and it was narrated by Elizabeth Acevedo who I loved after listening to her debut.

Coming to Pride, it’s about Zuri Benitez and her four sisters living in a crammed apartment in Bushwick, a black neighbourhood in Brooklyn. Enter the Darcy family, who move just across from the Benitez to a renovated mansion , with their two boys Darius Darcy and Ainsley Darcy. Zuri is fiercely proud of her Haitian-Dominican heritage and her neighbourhood and is trying to go to Howard University, a historically Black college. She is against the gentrification of her neighbourhood, fearing that it will be whitewashed in few years. And when the mansion across is renovated and a wealthy family moves in, she is all set to hate them with her whole heart because she thinks they will try to change her neighbourhood, increase it’s market price, making it more vanilla and less chocolate , if you know what I mean.

Sticking to the original classic, Janae and Ainsley fall for each other while Zuri and Darius bicker. I didn’t really love the chemistry, because it felt confusing to see Darius have multiple personality while this transition is smooth in P&P. It was very abrupt and felt like it had no strong base. There’s a lot of class discrimination and family dynamics. I love how Bushwick is discussed more and travels very much like a character within the book. With all the diverse setting, my personal opinion is the book could have been better.

Zuri disliking her sister’s relationship for a stupid reason, prejudiced against her rich Black neighbours because they are not authentic enough, and being very judgemental was enough to make me feel like she’s not the Liz Bennet I love.

Darius – my boy, you didn’t meet my expectations of Mr.Darcy. He’s way above there! Yes, Darius is socially awkward like the original Darcy but the similarity ends right there.

I rate the book a 3.75 stars, 3 for its attempt at a diverse retelling. . The extra 0.75 is for Elizabeth Acevedo’s beautiful narration.