Source: I received an ARC from the publisher via NetGalley in exchange for an honest review.

Ayla Hawkins is ready to stand up for change in her high school. But winning the election for class president against popular Jenna Lee will be impossible without a miracle. 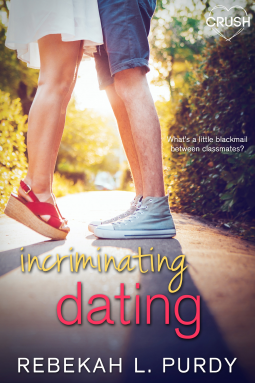 When she stumbles upon Mr. Perfect Luke Pressler defacing public property and catches it on camera: cue miracle. Ayla’s got the dirt she needs to get Luke on Team Ayla—in the form of her new fake boyfriend.

One mistake. All Luke wanted was a night to goof off, to blow off steam. The pressure of maintaining the perfect facade when his reality was crumbling around him had become too much, and next thing he knew, he was pretending to date Ayla Hawkins. But his little blackmailer turns out to be kind. Honorable. Opinionated. And just the breath of fresh air he didn’t even realize he was suffocating for. But Luke and Ayla come from different worlds, and once the election is over, their fauxmance will be, too.

Disclaimer: This Entangled Teen Crush book features adult language, sexual situations, and plenty of girl power. Reading may result in swooning, laughing, and looking for a Luke of your own.

Okay, the story is simple and it follows the standard formula – Geek blackmails Jock -Fake Relationship – Falling for each other -Some twist – All is well that ends well.

The author has followed the formula to the T.

So about the characters – Ayla Hawkins – a geek who runs the school paper as well as a main part of drama club is outraged that the school has cut off funds to art clubs and instead increases funding to sports. She comes off like a geek-rebel but she keeps saying she is just a bystander who normally doesn’t talk much. She says she hates the rich families and their kids who act like everything is under their disposal, but she isn’t poor, mind you! She has tree (boat?!) house that looks bigger than Luke Pressler’s house. So I found it hard connecting to her.

Luke Pressler – popular jock, putting up a pretense in school that he is still rich and lives in big mansions. But inside he is raging and trying to cool off his hatred towards his dad for forsaking them, and in a moment of rage vandalizes public property. But otherwise, he is responsible big brother to Landon, takes care of him and helps his mom in paying bills.

The fauxmance turning to romance is predictable but I did enjoy it. All through the book, I was waiting for the video to go into the wrong hands. Because, duh the formula!

I’m being honest here and will list out the things that I liked and disliked.

I’ve read other Entangled Teen Crush books that have a similar story, but if you haven’t read any of them, you can give this a try, because its cute, high-school romance with some swooning. My rating is 3/5.

Buy the book from Amazon and Barnes and Noble.