Source : Review copy provided by the Publishers (Thank you!)

For the past thirty years, Mr. and Mrs. Jha’s lives have been defined by cramped spaces, cut corners, gossipy neighbors, and the small dramas of stolen yoga pants and stale marriages. They thought they’d settled comfortably into their golden years, pleased with their son’s acceptance into an American business school. But then Mr. Jha comes into an enormous and unexpected sum of money, and moves his wife from their housing complex in East Delhi to the super-rich side of town, where he becomes eager to fit in as a man of status: skinny ties, hired guards, shoe-polishing machines, and all.
The move sets off a chain of events that rock their neighbors, their marriage, and their son, who is struggling to keep a lid on his romantic dilemmas and slipping grades, and brings unintended consequences, ultimately forcing the Jha family to reckon with what really matters

Mr.Jha experiences a lucky windfall when his website brings him a huge sum of money and with it a quick turnaround in his life. Living in the shadows of his Uncle’s house his early days of life are unsuccessful and he manages to buy a small apartment in East Delhi. Mrs.Jha manages the household with her husband’s salary and works for a nonprofit organization helping artisans. Their only son Rupak is sent to one of the rich kids schools in Delhi where he always feels like an outsider.

Now in his fifties, Mr.Jha has his lucky breakthrough and a chance to start over in life. He begins by moving over to a posh neighborhood in Gurgaon, lavishly spending on the house and sending his son to the United States to pursue his MBA.

Rupak is a confused youngster who is still coming to terms with the sudden change in lifestyle and his parents decision to move to Gurgaon. He flunks in studies and has an American girlfriend, who he pictures to have the typical American sitcom character’s life and never pays attention to her in real life.

Mrs.Jha is forever in the middle, not knowing how to embrace the rich life and worries about every unwanted expense her husband makes but always proud of his hard work.

The book follows the life of the Jhas and those around them and how East Delhi meets Gurgaon in a funny way.

Mr.Chopra, the show-off neighbor of the Jhas in Gurgaon, does everything to impress people of his wealth and to prove his status. He takes pride in introducing his 28-year old son who he still supports financially because he simply can.

After the move to Gurgaon, there is a constant battle for status between the Chopras and Jhas to show off and Mr.Jha feels that it is totally necessary to keep up with his neighbors.

The book was so much fun to read and you can easily relate to the characters because we meet these kinda people in real life. The struggle to fit in and keeping up is a contant battle in all our lives and this book was very realistic. Its amusing to read how the rich struggle to spend money, the emphasis here, is on the spend and not on the money 😀 They really can’t figure out how to spend everything they have 😛

The book did put into light in a rather subtle way certain things in our society like the life of a widow, the scrutiny she has to undergo for every penny she spends or even just living her life. Widow remarriage especially a suggestion for online dating sites/matrimony sites for divorced & widows was good. Also, thrown in as a matter of fact was, how Rupak knows all about his father’s work but nothing about his mother’s. The understated sad truth about the majority of married women who give up career to concentrate on family.

Overall, this book was fulfilling and not once I thought it was a typical made for Bollywood kinda script. It was funny and without exaggerations.

P.P.S  Sorry for disappearing for a while

Source : Review copy provided by the Publishers (Thank you!)

The characteristics and reasons for urban poverty are manifold and seem to repeat across class structures: migration, culture shock, real estate costs and unrealistic expectations of city life, a lack of financial education, corporate cultures that perpetuate stereotypical workforces, a glamourised entrepreneurial culture that focuses on icons of spending instead of struggle, and economically and politically, the rise of the cashless credit economy and the demise of the thrift economy and its conservative icons. 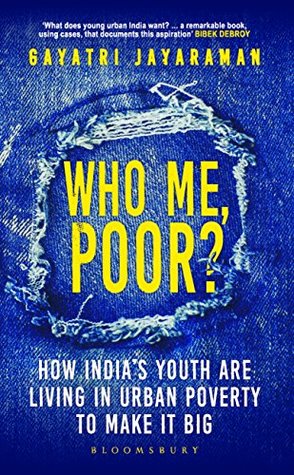 The book will use the case studies of young Indians, typically in their first or second jobs, migrants to major Indian metros, living in these conditions. The reasons for the poverty they experience are varied, and influenced by the industries they work for, their family backgrounds, other financial obligations, social stratas, and peer groups. There are so far, no studies available for this in India, and is a rising phenomenon in the US where it has been called ‘poverty with no name’. Gayatri’s short piece on the Urban Poor crossed 1.1 million views on Buzzfeed – the highest number for any Indian feature article to date

Before heading to the review, I should point out that I’m not a big fan of Non-fiction and I have tried to give an honest review as much as possible.

The book is divided into four parts – Who are the Poor, Why do they spend, Brand I, Go for Broke. Each of these sections have several anecdotes and examples that are related to the titles. For example, the first section – ‘who me, poor’ has stories of people struggling to fit in, carve their niche, and in the process spend a lot of money to get attention and to build networks and survive. The story of the fashionista who skipped meals just because she needed money to live in the ‘happening’ place in the city and wear designer clothes shook me. The reason we spend is mostly attributed to the fact that a successful career depends on spending beyond our earnings. I’ve been working for the past 4 years, living away from home and I know what peer pressure, the easy money and the city life can turn you into.

The part about credit cards and EMI’s was like a wakeup call because I’m guilty of buying expensive stuff and paying excessive financial charges. And like me, there will be others, a huge mass of them. I felt like this book was meant for this crowd, (the ones who spend on something that to most parents would look unnecessary) to create an awareness, to make them understand that impressions can be made without the need for spending more than they can afford.

A must read, especially for youngsters who have just started out with their first jobs.