On his second adventure, Bhrigu Mahesh is called to help by a hapless, retired clerk named Nataraj Bhakti, who thinks he is being haunted by the spirit of his dead wife. As he investigates, the mystery deepens and takes a sinister turn. A woman gets brutally murdered, and the great detective faces the challenge to either catch the killer or risk the destruction of many innocent lives. 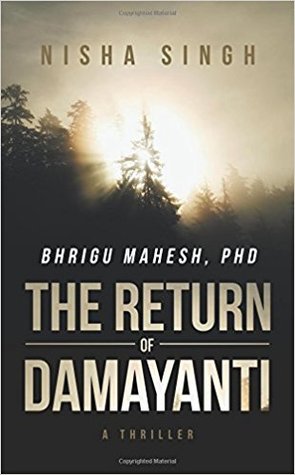 services and I had only a day for reviewing this book so I couldn’t check the first one.

I believe this can be read as a standalone novel, but there is little background story offered for the two main characters of the book.

Bhrigu Mahesh and his friend Sutte are portrayed like Sherlock and Watson, and to a degree Bhrigu is more like Hercule Poirot. While reading the book, my mind went to these fictional heroes because of several similarities in character especially the one I most hate – belittling the companion. When Sutte doesn’t understand Bhrigu’s perception, he never clears it out for his friend and gets irritated at his superficial knowledge.

In this book, the duo are approached by a retired government clerk as he fears that his dead wife’s ghost has returned to haunt him. Bhrigu takes upon the offer of visiting Nataraj Bhakti’s ancestral home to investigate further on the case. Whilst Sutte isn’t happy with the arrangement, as the house in itself looks haunted and basic necessities are a big problem, he settles in after meeting Nataraj’s widowed sister, Savita. Bhrigu keeps observing thinks and when the paranormal activities subsides after his stay, he doesn’t immediately offer his client the cause of the problem but rather returns home. The detective and his friend are rushed back to the village of Krishna Dwar after hearing the news of Savita’s murder. They investigate the murder with the help of local police and identify the murderer by page 300 itself. The rest 140+ pages go on about the person behind the scenes and his influence on the murderer.

Personally I felt the book dragged at places. Instead of introducing the main characters and a little background story on them, there goes a chapter long discussion with Bhrigu’s friend Daisy. Big descriptions that were not needed or repeated could have been edited.

As it is a thriller, readers are bound to be intrigued on the happenings of the story and when a murder is involved, we need a lot of action. Be it the phantom part or the murder investigation, the detective kept most things to himself until the final reveal. So naturally, I started getting bored. After the murderer is revealed, I pretty much got an idea about why he/she was influenced and who had influenced.

The writing was okay but there were too many mistakes like “there parents/her wife/there profile pictures etc. The common mistake was there instead of there.

The book talks about the alpha-male, how women are mistreated still in some rural areas and asking them to fight for their rights, but playing around with the minds of the weaker sex isn’t what I expected.

This review is a part of the biggest Book Review Program for Indian Bloggers. Participate now to get free books!