Source : I received an ARC from the publisher via NetGalley in exchange for an honest review. 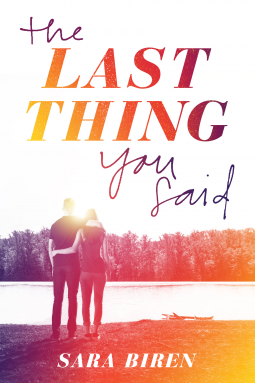 changed in an instant.

One moment, they were shyly flirting on a lake raft, finally about to admit their feelings to each other after years of yearning. In the next, Trixie—Lucy’s best friend and Ben’s sister—was gone, her heart giving out during a routine swim. And just like that, the idyllic world they knew turned upside down, and the would-be couple drifted apart, swallowed up by their grief. Now it’s a year later in their small lake town, and as the anniversary of Trixie’s death looms, Lucy and Ben’s undeniable connection pulls them back together. They can’t change what happened the day they lost Trixie, but the summer might finally bring them closer to healing—and to each other.

This book by debut author Sarah Biren is about loss of a loved one, the grief that follows and the toll it takes on relationships. It is narrated in alternate point of views – Lucy and Ben’s. The author adds a note to readers at the beginning of the book, that it is meant for anyone who has suffered loss. 😦

Trixie and Lucy are best friends right from their kindergarten days and are glued to each other. At the age of 12, Lucy realizes that she has a crush on Ben, Trixie’s brother and when she blurts it out to her best friend, she is surprised by the fact that Trixie is overjoyed that one day they will be married and the two of them will become sisters. For the next three years, she silently yearns for Ben while he shifts from one girl to another. The summer which changes her life, the summer where Trixie decides to bid goodbye to them forerver, is the summer Ben starts falling for Lucy. Minutes before his sister’s death, he is about to ask Lulu to be his girlfriend when Lucy’s brother Clayton cries for help and interrupts his question. While both Lucy and Ben grieve for Trixie, Ben kisses her just after the funeral, which turns Lucy into a fireball of emotions and pushes him off. Ben is ashamed of what he did and guilt takes over him that makes him react in the stupidest way possible. He blames Lucy for Trixie’s death. That he couldn’t save his sister, because he was distracted by Lucy.. Total douche bag move!

Fast forward to the present, its been one year since Trixie’s funeral and Ben and Lucy are not talking to each other, let alone be in a relationship. Both the families are trying to recover from the loss of the loved one – Trixie’s mom takes up gardening and keeping herself busy, her dad ends up drinking while Ben turns cold, insensitive, alcoholic and angry, round the year. The summer after her death, Lucy is still trying to get over her first love and her neighbor’s summer renter Simon turns to be a distraction. Only when something is lost we do realize its worth and Ben soon finds himself jealous of Simon and though he wants Lulu back he is not helping it because of his dumb moves. He couldnt save Trixie, but could he save himself from getting deep into trouble and winning back Lucy’s love?

This book is a totally an emotional journey through loss and broken relationships. I have lost my best friend too, not to death but to circumstances and I can imagine how much it would hurt when he/she is no more. But I did not like that their lives are still stuck with the past summer and that 80% of the book is about grieving. I mean, i think that okay, this is the point he is going to make up for his behavior, but no ! again he goes  and breaks her heart.

Though the book is about how Lucy is unable to get over Trixie’s death,  she is atleast trying to live. She tries to be a rebel, sneaks out and goes to the rodeo with Hannah and Simon. For this, she turns out to be my favorite character in the book. You mourn with her, you ache along with her, you feel her…

The book reminded me a little of Twenty Boy Summer, by Sarah Ockler. Sea glasses in that book, while it was agates in here. Both books are about the grief caused by the death of an important character.

Sadly, i do not have a quote that i like from this book, even though there’s so much stress on the Book of Quotes that Trixie and Lulu have. I’m not sure whether I will re-read it because its little sad, tragic and emotional, but definitely recommend anyone going through the final stages of mourning a lost love to read this. My rating is 4/5.

You can get this book from Amazon, Barnes and Noble

2 thoughts on “The Last thing you said – Book review”