The Fifth Petal by Brunonia Barry is the second book in the Lace Reader series. Though I haven’t read the first one, I was pretty much able to follow the plot. 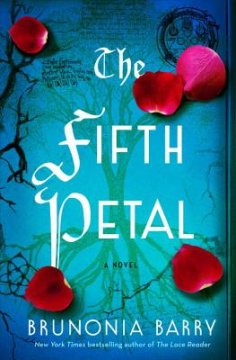 Salem’s chief of police, John Rafferty, now married to gifted lace reader Towner Whitney, investigates a 25-year-old triple homicide dubbed “The Goddess Murders,” in which three young women, all descended from accused Salem witches, were slashed one Halloween night. Aided by Callie Cahill, the daughter of one of the victims who has returned to town, Rafferty begins to uncover a dark chapter in Salem’s past. Callie, who has always been gifted with premonitions, begins to struggle with visions she doesn’t quite understand and an attraction to a man who has unknown connections to her mother’s murder. Neither believes that the main suspect, Rose Whelan, respected local historian and sometime-aunt to Callie, is guilty of murder or witchcraft. But exonerating Rose might mean crossing paths with a dangerous force. Were the women victims of an all-too-human vengeance, or was the devil raised in Salem that night? And if they cannot discover what truly happened, will evil rise again?

The book begins with a crime scene and a bleeding child, the daughter of one of the victims. What spooks you is the scar in the little girl Callie’s palm, shaped in the form of a rose- a five petaled rose to be exact. Fast forward to 25 years and the investigation is already closed, but unsolved. Rose Whelan is accused of the murder but losing her mind on the night of the murder saves her from being charged. The book draws an intriguing start and you start wondering who actually killed the three girls. And immediately, in the present, 2014, same day of the murder, 25 years later another death happens and again Rose is put on the spot. When the news becomes viral, the only other survivor of that fateful night, Callie learns that Auntie Rose is still alive and returns to Salem in order to find the truth. What follows next, is the revelation of bits and pieces of the night of 1989 murders and whether Rose gets acquitted and who is the mystery fifth girl aka fifth petal.

The book was scary and spooky at times when Callie had her nightmares or when Rose talks about the screaming Banshee. I wanted to like the book despite the spookiness, but i found it very long and dragging. Some parts of the book were very detailed and not required at all, like the detailed explanations about Paul and Callie’s Italy trip. Or the parts about May and Rafferty’s daughter. Maybe they were added to give a connection to the first book, but they were not needed because the book was lengthy enough. I was mainly interested in the book because it had connections with the famous witch trials of Salem. But the girls who were murdered were anything but witches.

Rafferty mainly relied on Callie’s dreams and Ann’s visions. This was totally unlike other suspense/thrillers where the police do all the work.A lot of stuff about music therapy was completely lost on me. 😦

I did predict the killer to an extent and it did get a little fast paced towards the end. Maybe because i skipped a lot of details about how Rafferty gets in towards the end.

It’s a worth a try, if you are interested in speaking tress and screaming Banshees. My rating would be 3/5.

FTC Disclaimer: I received this book (through NetGalley) from Blogging for Books for this review.